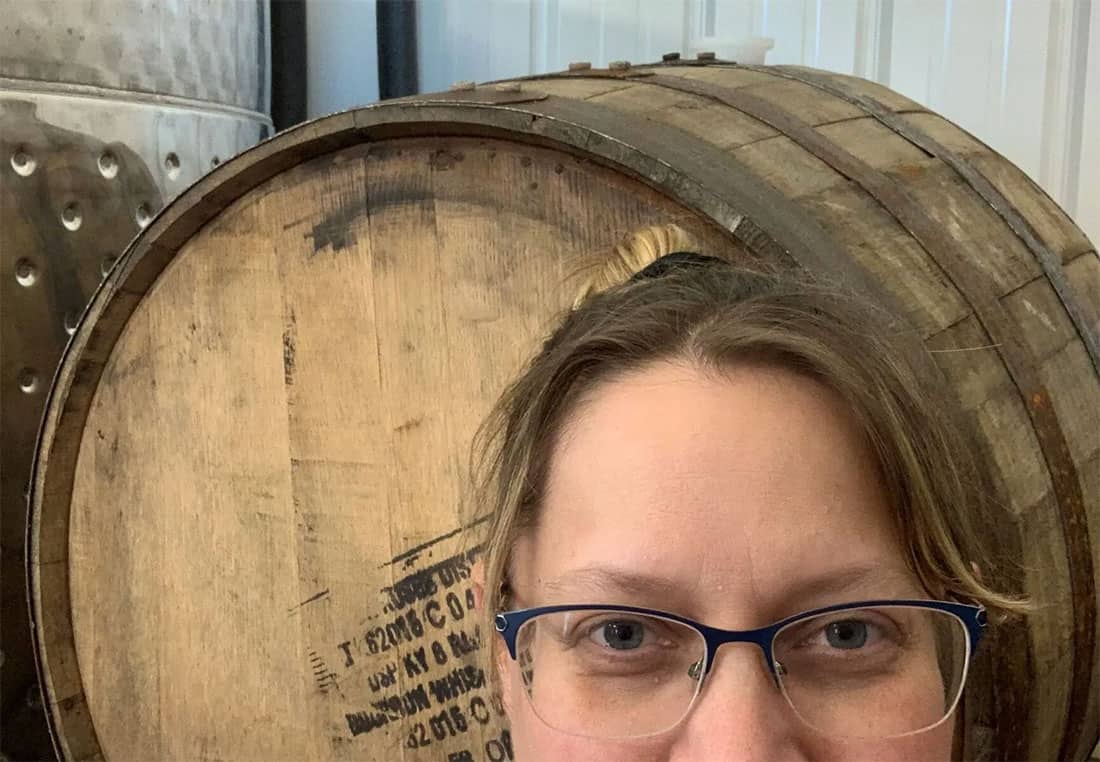 Bochet – Her cooks some honey for barreled wine

What an earth is a bochet? Like “metheglin” or “capiscumel” the word “bochet” is one that doesn’t get used by most people in an everyday kind of way. They are all words for a specific type of mead, and as we’re still working on getting the population to know what “mead” is, it’s understandable that the more esoteric references are also entirely obscure.

So, to drop a little knowledge on you, a “bochet” is a mead made with caramelized honey.

In all of our other meads, we use honey right from the hive. Sort of.  It gets removed from the frames first, filtered to get out wax and bee bits and put into barrels. But we don’t do anything else to it, like pasteurizing.

But then, if we always do the same thing, maybe it gets a little boring around the winery. So, let’s do something a little different. There’s this thing called a “bochet” – let’s try that!

Right. First we have to caramelize honey. Hmmm.. that means adding heat. In your kitchen, this is fairly simple. Pot on stove. But how much are we going to make? How much honey do we need?

A standard size batch of mead for us is 3000 litres – and we will use anywhere from 1400 to 2000 lbs of honey in a batch that size. I don’t know about you, but I don’t have a pot big enough for that in my kitchen. And what if something goes wrong in our process? Do I want to commit that much honey to something I’ve never done before?

Now at this point it would likely have been prudent to do a small test batch – say a 23 litre carboy – and see how it turned out. And I was going to. Really I was. But then time ticked on, and there was lots of work to do, and the minion of four weren’t in school (thanks, COVID) and we said “Oh let’s just do it”.

To be prudent – one barrel of honey. That’s 650 pounds. Get the barrel warmer running at super hot and – GO!

What was the result? Some VERY dark honey with a deep dark flavour. And, oh boy, what kind of mead will it make? I won’t deny I was nervous. Treading in uncertain territory – but we forged bravely on!

NOTE: If you were lucky enough to catch the “Honey” episode of Flat Out Food  in March 2021, then you got to see us getting this mead started. Jenn Sharp approached me about being featured in the show, and when the crew asked what we could have Jenn doing to show how we do what we do, I said “I’ve got a small batch bochet to start – she can get sticky with me!”

Now, if you did catch the episode, don’t let the magic of film-making fool you. The crew was here all day, and that’s how long it takes to get a batch started, between dealing with the honey, mixing, must-testing, measuring nutrient and rehydrating yeast, etc. On the show it takes about 4 minutes. I wish.

So the yeast take off with their fermentation, and once they’re all finished I got serious with sampling. (no that doesn’t mean that I over-imbibed – much). And I found new types of honey notes from that scary caramelization. A dark, almost smoky flavour heading towards, but not quite reaching bitter. It was good – different – but good. Yet I couldn’t help but feel that it wasn’t finished yet. It needed a little something – but what?

I don’t know where the inspiration came from. Maybe from emails I was getting from barrel brokers, or maybe from my mead muse. Either way, the inspiration was simple. Barrels. Not just any barrels mind you – bourbon barrels.

So I approached Him with the notion. His first response – “where are we going to put them?” Heavy sigh from his wife. These are the trials of living and working with a warehousing and logistics professional. My answer – “I don’t know. You’ll figure it out.” I’m such a loving wife. Full of confidence in his abilities. And I was right. He did figure it out.

We’ve never done barrel aging before – all of our oaking is done with chips, cubes or staves – so there was no infrastructure in place (and yes, not really any room to store barrels – but I did it anyway. There were only four.) I reached out to one of those barrel brokers whose email lists I was somehow on, and I found a quartet of Kentucky bourbon barrels – just the right amount for our small batch of bochet.

Then I set off on a research adventure. Have you ever considered how you get something out of a barrel? Do barrels leak? Do they need special treatment? Should I sing to them? (the answer to that last is “no”.  I mean, you can sing to them, but it doesn’t seem to make any difference.)

Right – step 1. Swell barrels with water so that they don’t leak. This is a great step, because then we got to answer the question of how you get product out again once it’s in. Using science! I got myself a tool called a barrel bulldog that injects inert gas into the barrels (like CO2 or nitrogen) and the pressure pushes the liquid out through the bull dog’s tube. That was fun!  (So was the shopping for new gear.)

Step 2. Fill with mead. A fun little gun attachment for my hoses let me move the bochet from it’s fermentation tank over to the barrels. And I only spilled a little bit. On each barrel. But it was totally fine.

Step 3. Wait. Wait for the barrels to do their magic. And at some point (give it time – don’t be too impatient) TASTE.

WOW. The barrels have provided a little sweetness, a smooth finish and intensified the caramel and vanilla notes. It’s a tasty, and undeniably unique mead.

I can’t wait for you all to try it. Our experiment tastes great! As of this writing, we are finalizing our labels and expect to release our Boubon Bochet the third week of April.

This is a show-stopping limited release mead that begs to be enjoyed fireside – whether it’s a campfire, a barbeque, or your gas-powered toe-warmer. Personally, I think it’s going to pair really well with toasted marshmallows!